Below is the transcript from a Zoom chat I had last month with a fundraising professional I have admired over the years.

Brian: I’m delighted to be here today with an old friend and colleague, who is a fundraising professional like many of us and has had to grapple with COVID and how to reach donors. There’s been a lot of talk about how to solicit via video chat, and this colleague of mine successfully solicited a six-figure gift on Zoom recently. So, the first question I have is, what was easier and what was more difficult, in this one particular case, than it would have been if you were in person?

Interviewee: Just like being in person, there is also an intimacy when it’s two people on Zoom. You really have a kind of captive audience and I think it focuses you better.

Beforehand there’s a little bit more prep that goes into it because sometimes, when you go visit a donor, or you go out to lunch with someone, there’s a lot more room to have idle conversation. I think we’re all much more aware these days of a kind of Zoom etiquette, and the feeling that after a certain amount of time people are done.

So, you tend to be a little more thoughtful and streamlined, and have a little bit more of an internal agenda about what you want to get accomplished.

By the way, this ask happened over a period of time. Like most six-figure asks, it doesn’t just happen with one visit. There were a number of different touch points along the way, but the closing of the deal was done via Zoom. 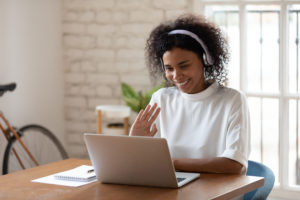 Brian: How much time did you have on this call?

Interviewee: I would say about 40 minutes.

Brian: A good amount of time. And have you had many Zoom chats with donors, whether they’re for asks or not?

Brian: And how long would you say they’ve been, on average?

Interviewee: About a half an hour, which I think for Zoom is just about perfect. And it’s subconscious or subliminal in a way. When you send that invite for a half hour, it allows the donor to relax a little bit. They know it’s not this long, drawn-out meeting. They can see there’s an efficiency to it. They also might find it more relaxing than an in-person meeting, especially at their home. Sometimes, when we do that, people are nervous, or they feel like they have to serve you food or clean everything up.

Brian: Are you finding a difference in terms of age as to who’s more receptive to this? Or is there a group of people not receptive, in general?

Interviewee: That’s really interesting. Because we’ve been doing a fair amount of major gift fundraising, it’s been a little bit the more seasoned, older donors. They’re 45 to 60-plus, so not the younger, tech-centered folks.

Brian: In these meetings we always want to make sure the donor talks more than less. Do you find in video chats, especially since they’re shorter, that there’s still enough time for the donors to talk? In an hour it’s easy to ask a lot of questions. In a half hour when we’re getting down to business more quickly, has the balance been different for you?

Interviewee: Yes, and especially if you’re taking someone through a presentation. Even if it’s a conversation around the presentation, the truth is we’re trying to get the information across to the donor. This is what our major gifts initiative is, these are the priorities. We’ve tried to build some questions in so people can talk about themselves, but probably there’s a little less of an opportunity.

Brian: It’s like the phone, which we’ve always used. This is, in many ways, replacing phone as much as it’s replacing in-person. Are you doing less phone work?

Interviewee: Yes. And even before the pandemic we weren’t doing much phone work because we found people weren’t interested in talking on the phone. Everybody wanted the email, especially for annual giving – even if it’s a $2,500 or $5,000 gift. If they’re planning on doing it, it’s so much easier to do it by email. And so video chatting gives you a little bit more of an opportunity to connect with people.

Brian: We have a sense that six months from now we’ll be doing a lot more in person again, at least one-on-one and small gatherings. As a fundraising professional, I’m assuming you’re seeing the value of Zoom in the future, as an alternative to in-person.

Interviewee: Yes. I think it’s now one of the tools in the toolbox. It’s like, “Hey, can we meet in person? Or we can do it over Zoom. What’s best for you?” Especially for busy people as it’s really efficient. For all of the things related to fundraising, including events, we’re going to be in some hybrid model. Because we’ve also learned that we can streamline so much – many of our events can be on Zoom. 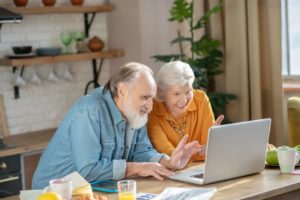 Brian: And can I assume you have donors out of the area who you are seeing for the first time, when you would have only been on the phone with them before this?

Interviewee: Definitely. One of the interesting things, and this is really related more to alumni and alumni donors, is we used to really struggle with putting on one alumni event a year. We always thought it had to be in person. Now we’ve had 30 alumni events this year, all virtual, and engaged tons of people. And we’ve had incredible speakers that we could have never had, because we wouldn’t have been able to afford them in person.

Brian: Have most of the donors been technically adept enough not to mess up your meetings?

Interviewee: It’s not perfect, but I think they’ve been able to adapt. Also, they enjoy the presentation aspect, which is really nice. Rather than print something out and give it to them, we can show them something more interesting on screen and walk them through it.

Brian: Wonderful. Thank you so much for sharing your experience with the field.